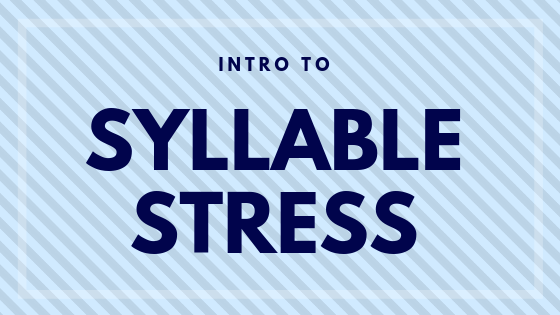 Hindi is a syllable timed language, as are most languages spoken in the Indian subcontinent. This means that syllables take up the same amount of time to say. As a result, Indian English tends to be more syllable timed.

What happens when you use syllable stress incorrectly?

Studies have found that people remember words by their stress patterns. When we speakers and our brains are trying to interpret what they are saying, our brain uses the stress patterns in order identify the words that are being said. That means that if you are using stress patterns to say words that a speaker isn't familiar with, it's going to make it much harder for you to be understood. It's possible they will not understand you at all, think you meant something else, or take a very long time to figure what you were trying to say. That means that getting stress patterns down correctly is very important in helping people to understand you.

and , which have similar sounds, but different stress patterns. This is why it’s important to understand and use stress patterns well. If you mistakenly pronounce with stress on the first syllable, it will sound more like , and if you pronounce with stress on the second syllable instead of the first, it will sound more like . In a sentence like "what did you think of the comedy?" or "what did you think of the committee?", if you are stressing a syllable that people aren't expecting to be the one receiving emphasis, you might cause some confusion.

Many speakers who didn't grow up speaking a stress-timed language or dialect don't realize how important it is, because often times speakers of syllable timed languages or dialects just place less importance on how words are stressed. Research has shown that in Hindi, word stress is less important, and that speakers of Indian English generally don't apply stress rules as rigidly as American English speakers. If someone emphasizes one syllable over an other it's not seen as big of a deal as it would be to an American English speaker's ears.

How are words stressed in American English?

Stressed syllables have a long length. Stretch out the vowel when you say them.

Unstressed syllables have a short length. Reduce how long the vowel is when you say them.

The first syllable, mu, is short. The second syllable, si, is long.

The third syllable, cian, is short.

Stressed syllables have a loud volume.

Unstressed syllables have a softer volume.

The first syllable, pen, is louder. The second syllable, cil, is quieter.

Stressed syllables have a higher pitch.

Unstressed syllables have a lower pitch.

The first syllable, pen, has a higher pitch. The second syllable, cil, has a lower pitch.

How native speakers of Hindi use pitch differently than Americans

Native speakers of Hindi and other languages from the Indian subcontinent tend to use pitch very differently. and this difference contributes to why speakers from Indian are deemed by some as having "sing-songy" accents. Hindi speakers do use pitch for emphasis, but unlike Americans a falling pitch might occur on an stressed syllable instead of a rising one, which adds to the confusion.

Stressed syllables can contain any vowel except .

Only strong syllables can be stressed.

Unstressed syllables can only contain , , , and .

You can read the blog post on schwa if you'd like to learn more about pronouncing the schwa vowel.

The first syllable, pen, is louder. The second syllable, cil, is quieter.

Using stress patterns correctly is a major part of the battle in getting people to understand your accent. American English speakers listen to the stress patterns of your syllables in order to figure out which words you're saying, but if you are stressing syllables in ways they aren't used to, they will struggle to understand you. Hindi speakers not only tend to speak in a way that is less stress-timed than native speakers of American English, but they also use pitch very differently, which is part of the reason why Indian accents are considered very difficult to understand by many speakers of other dialects of English. If you put in the time to practice stressing and unstressing your syllables like American English speakers, it will really pay off and Americans will find you much easier to understand.