How Indian Speakers Can Pronounce T and D More Like Americans 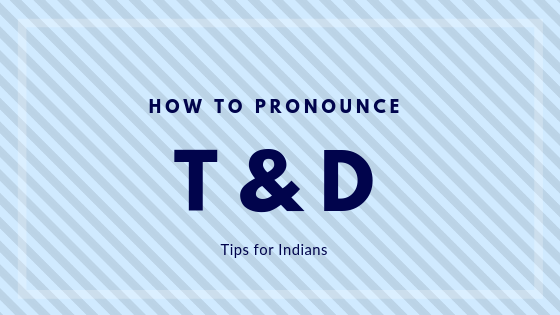 People who grew up speaking American English tend to pronounce the sounds "t" and "d" differently than the way speakers from India do. The way Indian speakers often say these consonants is one of the things that make accents from India very distinctive to the American ear.

Both speakers of American English as well as speakers from India make the "t" and "d" by stopping the air fully when they say them. For this reason, linguists call these sounds stops.

If a speaker from India says a word that is spelled with the "t" sound, they are likely to move their tongue behind their two front teeth as well, but instead of pointing their tongue forward as they touch the roof of their mouth, they are likely to curl their tongue tip and point is backwards. This is known as a retroflex pronunciation, and this pronunciation of /t/ and /d/ sounds is very common not only in Hindi but in many other languages spoke on the Indian subcontinent.

The retroflex way of producing /t/ and /d/ makes these sounds sound very different than the alveolar pronunciation. Even though other speakers of different language backgrounds might also not pronounce their /t/, /d/ in exactly the same place of their mouth as Americans (for instance, Spanish speakers are likely to use a dental pronunciation, made by touching their tongue to their teeth when saying /t/ and /d/), curling the tongue backwards makes the different pronunciation of these sounds very noticeable.

When pronouncing words that contain a "t" or "d", make sure to focus on the position of your tongue tip. Your tongue tip should touch the top of your mouth that is behind your two front teeth; specifically, your tongue should touch your alveolar ridge, in order to say the alveolar t and alveolar d sounds. Make sure that your tongue tip is pointing forward, and not curled backwards, or else you will be creating the retroflex t or retroflex d sounds, which sound very different.