How To Pronounce V and W 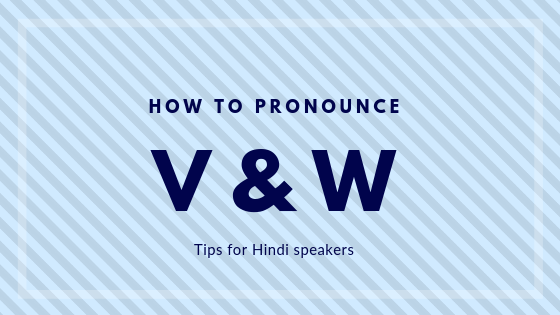 Americans think that Indians say "v" instead of "w", and many native Hindi speakers don't hear the difference. What's going on?

The reason for this confusion is that American English and Hindi have different phonemic inventories -- both languages use different sounds. Many times people have an accent because they don't have a certain sound in their native language, and they substitute one that is close to it. This is the reason Americans hear a "v" sound when they are listening for a "w", and why many Hindi speakers struggle to hear a distinction, because their native language doesn't make one between these sounds. For American English speakers, the "v" and "w" sounds are very distinct. The sound that Hindi speakers generally use isn't either of those, but a sound that is pronounced somewhere in between the two.

Pronouncing Words with The Letter W

Many times, if Hindi speakers say a word like "west", they pronounce it using a consonant that linguists describe as a voiced labiodental approximant. That means that this sound made by vibrating your vocal cords, touching your lips (labio-) to your top teeth (-dental), and narrowing the back of your mouth as the air passes through to make the sound. When written in Devangari, this sound is represented by व . Additionally, when Hindi speakers say the word "vest", they usually pronounce it with the same sound.

American English speakers would use two different sounds to pronounce these words. West and vest are known as minimal pairs because they are pronounced the same except for one sound, the first one. When American English speakers pronounce "west", they use the voiced labio-velar approximant. That means that this sound is made be vibrating your vocal cords, rounding your lips and narrowing the back of your mouth as the air passes through to make the sound. This sound is similar to the sound Hindi speakers use, but not the same.

Although both sounds involve vibrating your vocal cords and narrowing the back your throat to make the sound, Hindi speakers touch their lips to their teeth when making this sound, and American English speakers round their lips when making this sound. When Hindi speakers pronounce the word "west" by saying the first consonant with their teeth to their lips, it sounds more similar to the "v" sound to Americans than a "w", and they perceive that you are using the "v" sound at the beginning of your words. If you want to avoid this, you need to round your lips when saying this sound.

Pronouncing Words With The Letter V

When American English speakers say the word "vest", they are still generally starting this word with a different sound that Hindi speakers use. The "v" in American English is described as a voiced labiodental fricative. Like the sound that Hindi speakers tend to use, it is made by vibrating the vocal cords and touching the bottom lip to the top of the teeth, but more turbulent air flows when making this sound. While it sounds somewhat different, Americans don't generally perceive this as a totally different sound than "v" since aside from the airflow, the way that this sound is similar and gives it a similar, but "softer" sound. Nevertheless, if you use the voiced labiodental approximant when saying words that use "w" instead of "v", it is very noticeable to Americans, and might even stop you from being understood, because they might not recognize what word you are trying to say, or even mistake it for another word that begins with "v" instead of "w".

Minimal Pairs With V and W

Minimal pairs are pronounced the same except for one sound. There are quite a few minimal pairs for v and w in English, and if you don't pronounce these sounds the way Americans do, it will make it very hard for others to understand you. I would suggest practicing these words to make sure that you pronounce the v and w sounds in them distinctly.

When Hindi speakers use the voiced labiodental approximant when speaking English, it sounds more similar to v than w to native speakers of American English. This is especially confusing when Hindi speakers use the voice labiodental approximant to pronounce words spelled with "w", because American English speakers hear the "v" and "w" sounds as very specific sounds which shouldn't be mixed up, especially since there are several words in English where the only difference between them is if they are pronounced with "v" or "w". In order to be understood more easily, make sure to pay attention to the position of your lips and mouth when pronouncing words spelled with the letters v and w.